Hear My Prayer: Choral Settings from the King James Bible 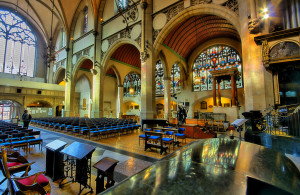 Fresh from their recent performances in Normandy and at the London Coliseum, Pegasus performed a free hour-long recital of choral settings of texts from the King James Version of the Bible, to mark the text’s 400th anniversary.

Beautiful music – spanning five centuries – was performed in the glorious 19th-century Holy Trinity church, the “cathedral of the Arts and Crafts movement.”

The last work was a finalist in the King James Bible Trust’s recent Composition Competition.

"The closing sequence, when the Pegasus Choir sing Morten Lauridsen's 'O Magnum Mysterium' into the darkness, is a potent piece of theatre."

Send us your name and email address to receive news of our upcoming performances. (Please see the privacy notice at the bottom of this page.)

If you have questions about Pegasus, please email us at info@pegasuschoir.org.uk.

Want to hire Pegasus for your event? Contact us now to enquire about bookings or anything else

Music from the time of the first world war by Rachmaninov, Ravel, Mahler, Holst, Stanford and others.