Matthew Altham has been the director of Pegasus since 2001.

Matthew Altham began choral conducting while studying at Oxford University, where he led performances of music by Poulenc and the major English Renaissance composers and sang with many of the principal university choirs, including Schola Cantorum of Oxford.

Alongside his work as director of strategy at a business information company, Matthew directs Pegasus, Vox Cordis and the London Bach Players, with whom he has performed on several occasions in Pau, France. He has toured as a conductor to Antwerp, Arezzo, Prague and Tolosa and has broadcast on BBC Radio and Classic FM. 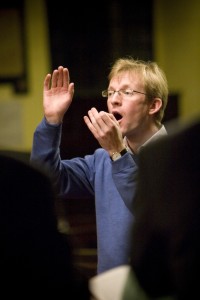 "The closing sequence, when the Pegasus Choir sing Morten Lauridsen's 'O Magnum Mysterium' into the darkness, is a potent piece of theatre."

Send us your name and email address to receive news of our upcoming performances. (Please see the privacy notice at the bottom of this page.)

If you have questions about Pegasus, please email us at info@pegasuschoir.org.uk.

Want to hire Pegasus for your event? Contact us now to enquire about bookings or anything else

Music from the time of the first world war by Rachmaninov, Ravel, Mahler, Holst, Stanford and others.